(Login and registration now occur through the store.)

We're still experiencing some difficulties with our new unified login - sorry for the inconvenience!.

thank you for the compliment!

Thanks for the info as well. As I said in the video, I tried to keep the original boiler pressures since you probably put alot of thought into it. It was a bit higher then before and the water actually started to flash boil after a while when pulling the lever. I adjusted it down a bit, now it should be fine. That's what the settings are for :) Preinfusion pressure is very nice to play with. I rarely found the motivation before when having to lift the top off and guess the pressure using only a screwdriver. It can make a huge difference taste wise.

Update on the mod:
I keep you updated.

P.S. I don't get notifications on private messages and you probably don't either. You can also contact me at This email address is being protected from spambots. You need JavaScript enabled to view it.. I think it would be best to use the forum though, since someone else might have a similar question.

File Name: LRBluetoot...21-2.zip
File Size:14 KB
). I already build it and it works great. I could remove all of this (with some additional test hardware to get rid of the resets): 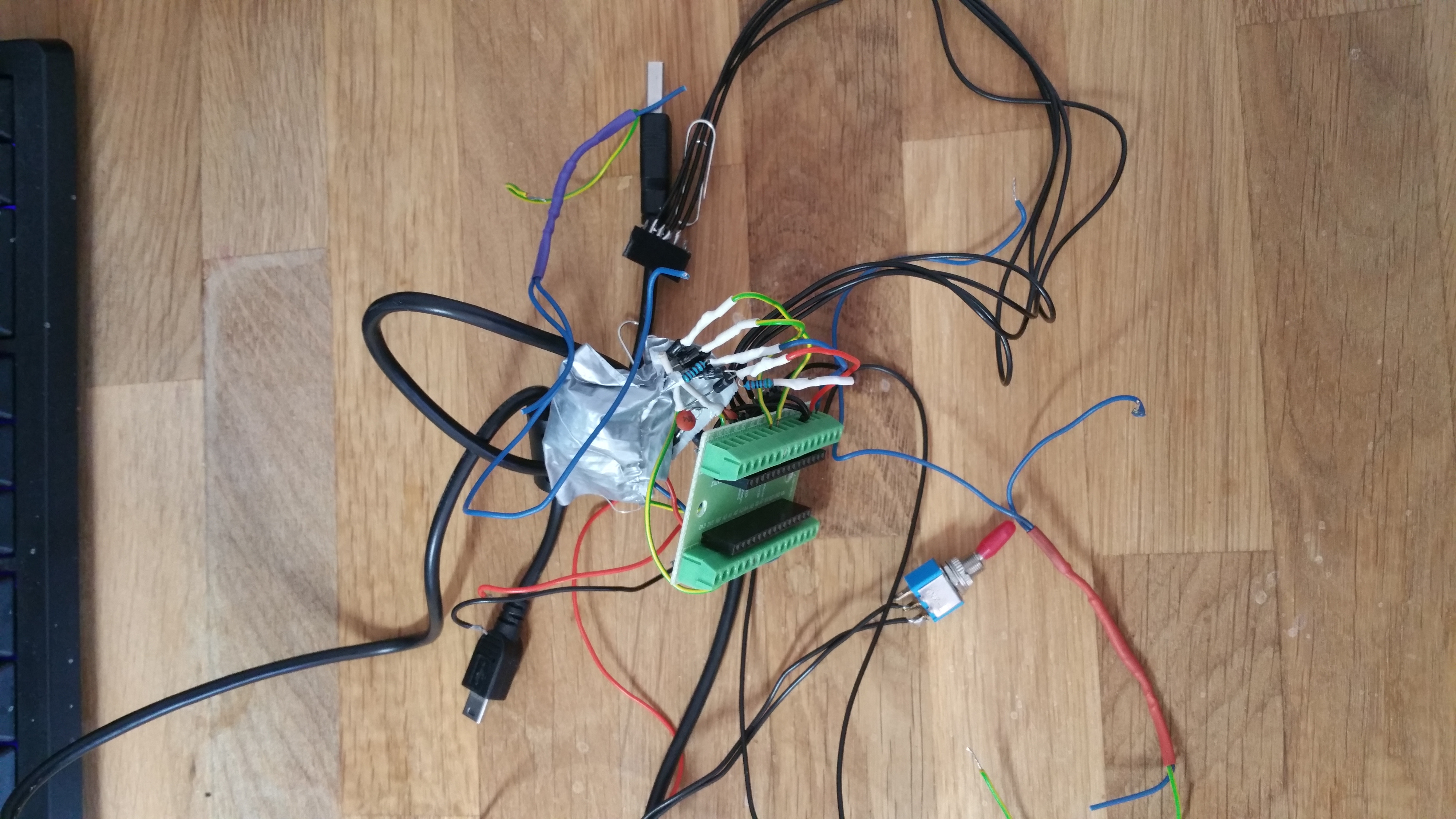 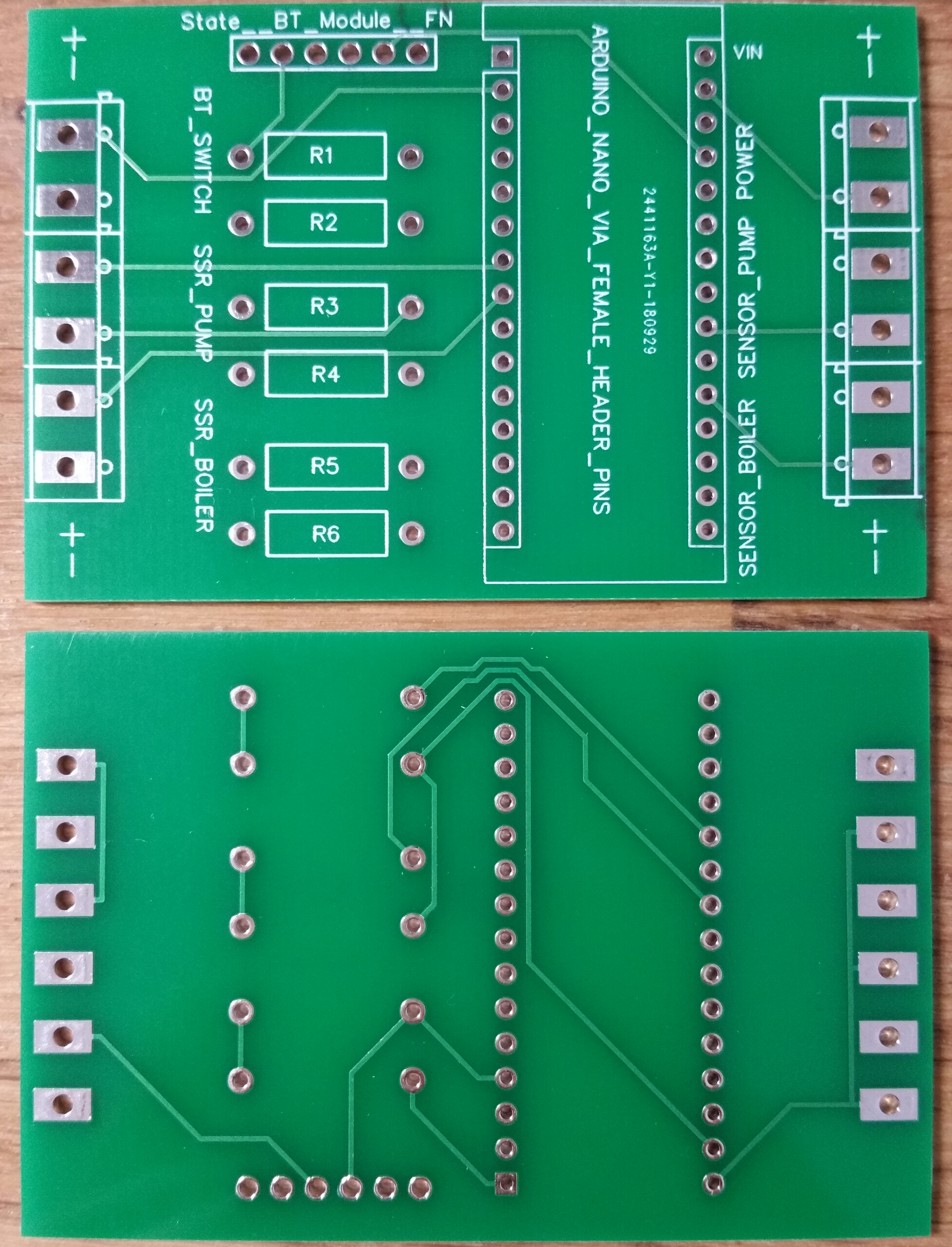 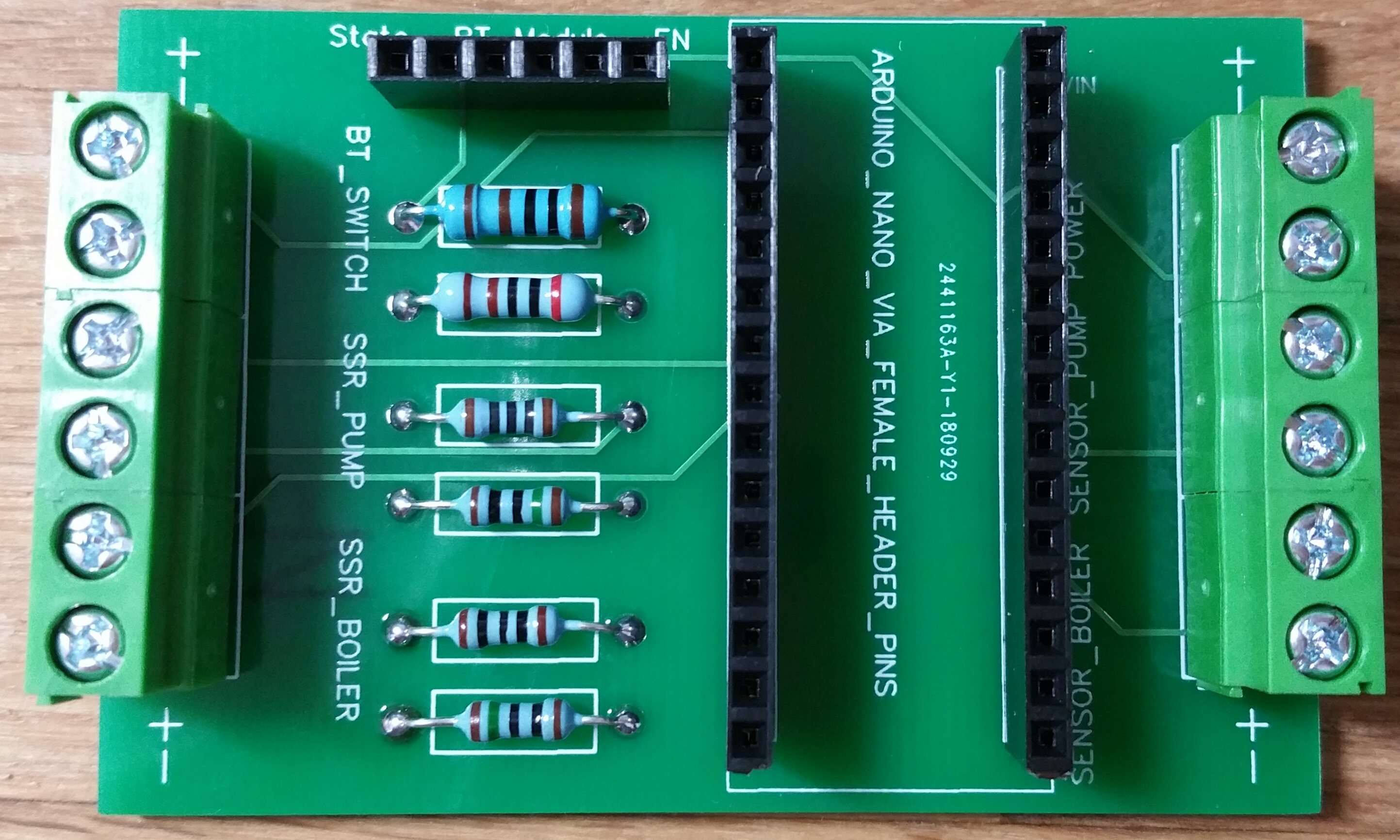 With the PCB all components can be connected directly i.e. no more soldering of resistors to wires for the pressure transducers etc. Since the PCBs are ordered in bulk I have 8 pieces remaining. If someone is interested I could send out a few complete kits. The bluetooth module can also be inserted at an angle to get a lower profile: 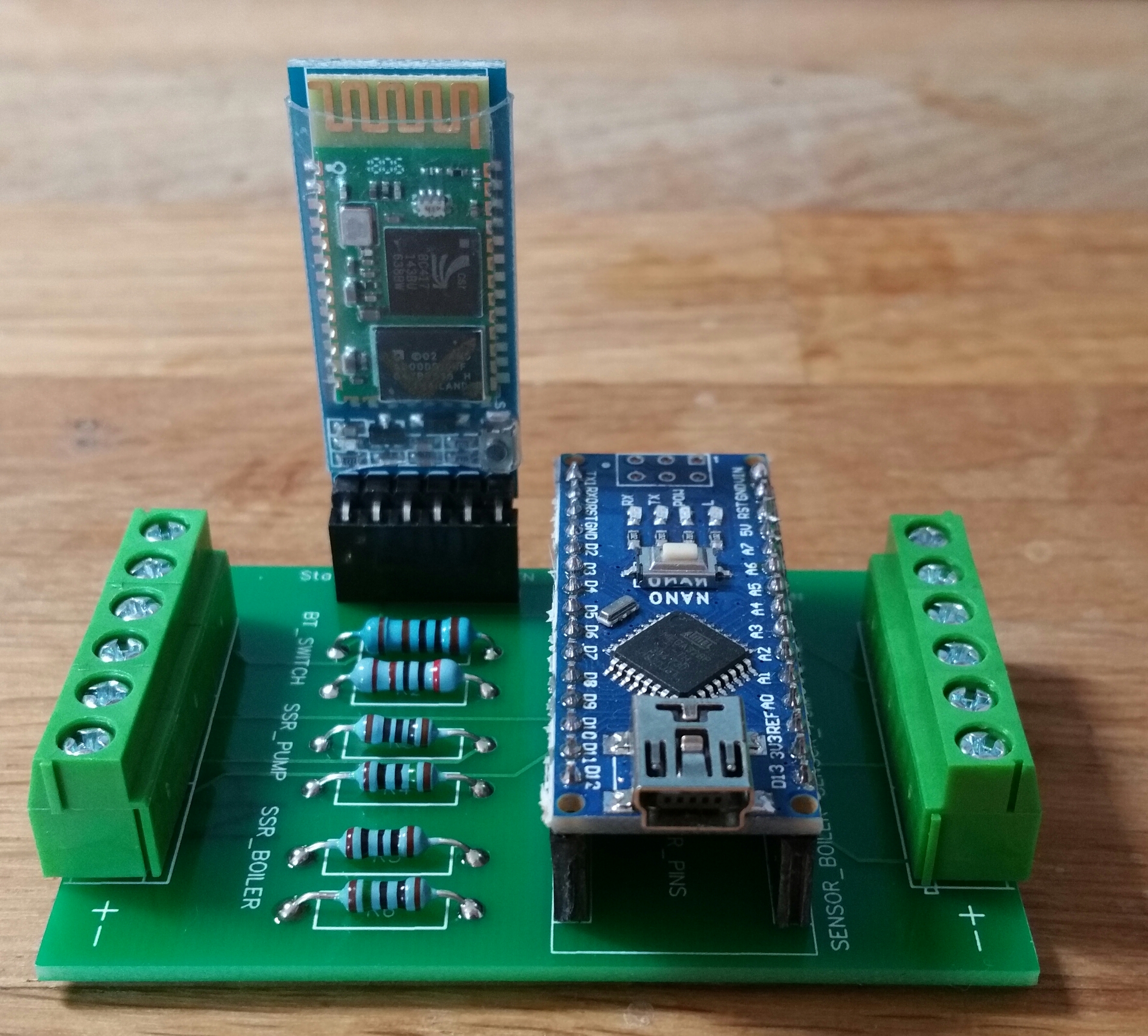 I think I figured out the reset problem. It seems it was only a question of placing the Arduino better within the machine. I admittedly just cramped everything in the corner. With the new pcb I isolated the back (add thick tape to it) and gracefully slid it between the water tank and backplate with the Arduino being on the water tank side. The SSR backplates are also not connected any more, so you can leave that step out from the build process.

These caused resets in the past approximately one in three times.

Less More
1 year 8 months ago #15073 by Nico Vierl
Replied by Nico Vierl on topic LR preinfusion and boiler settings App
Joshua tipped me off that Scott Rao is getting a significantly higher extraction by preinfusing at 4 bar and letting the puck soak (without the pump turning on during that time) for 30 seconds, then starting the extraction ( www.scottrao.com/blog/2018/7/18/advanced-mode-on-the-de1 ).
I started working on an update which will allow you to select if the pump should try to keep the preinfusion pressure at the set level or if it should wait for the puck to soak with a gradually falling pressure (due to the soaking). The machine code already seems to work. The interesting part was to find a way for the machine to know from what little information there is if the lever was pulled and if so, whether you are flushing the group or you want to preinfuse.

Here some screenshots from debugging: 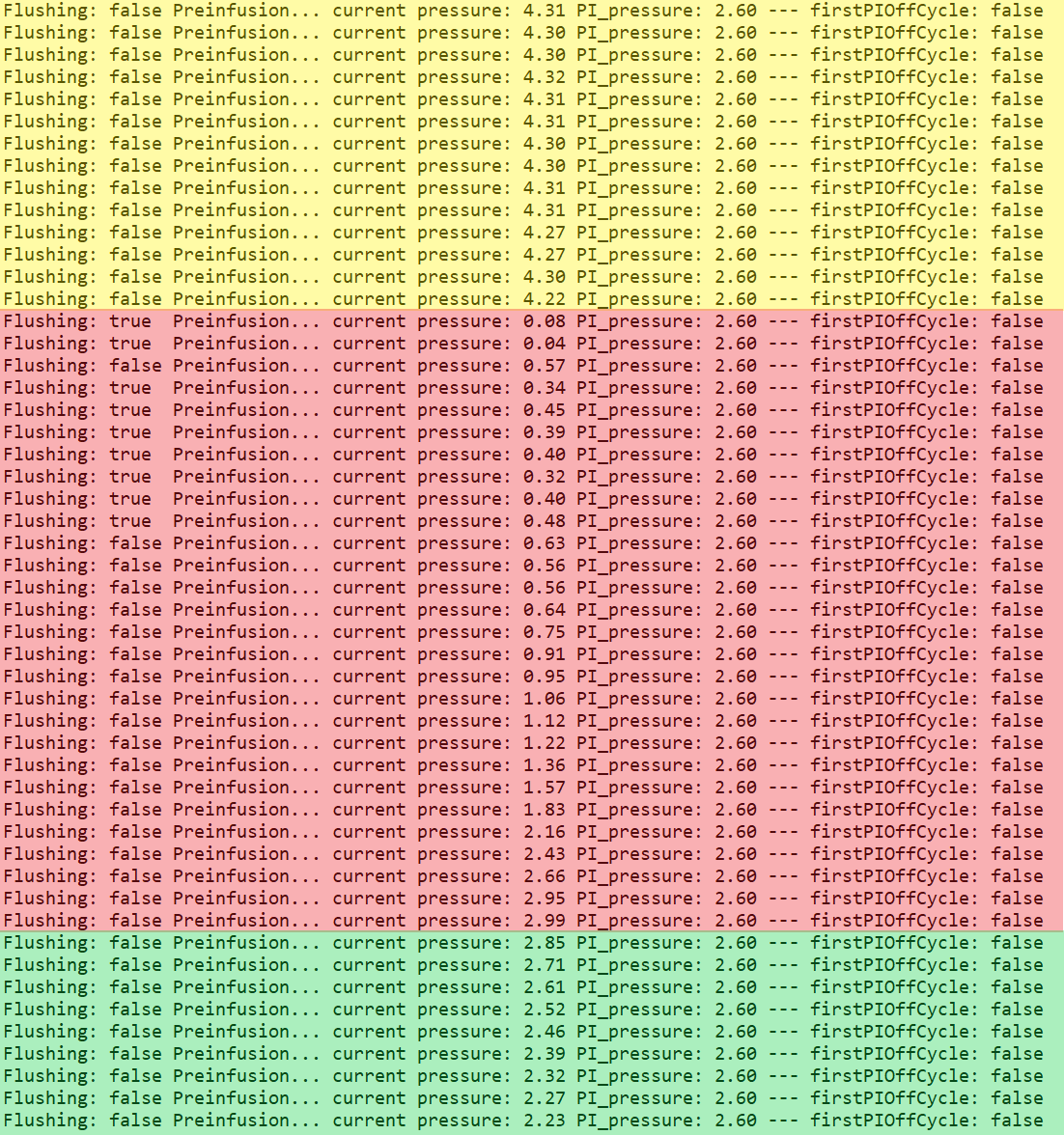 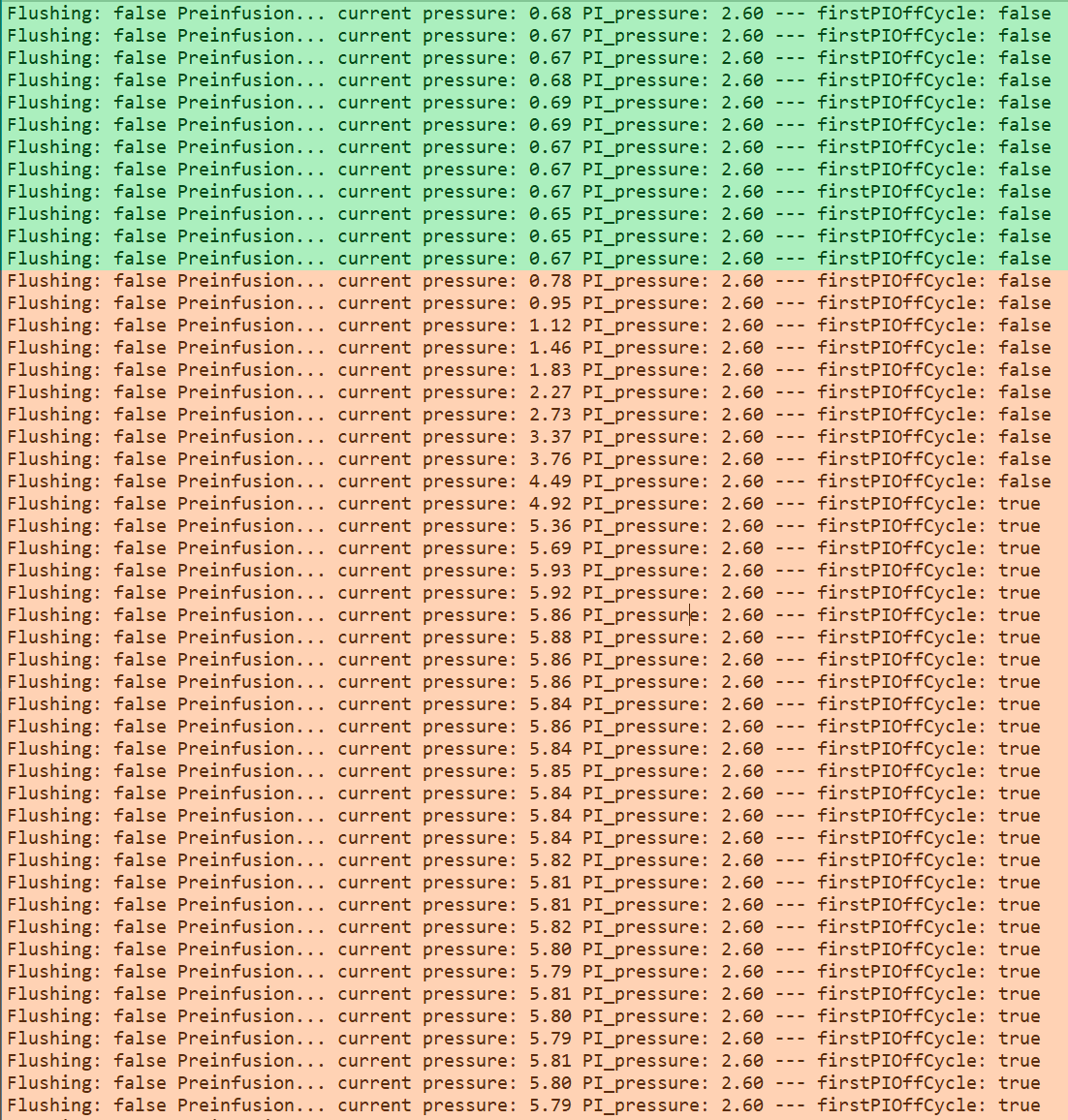 Keep in mind that I use old coffee for testing purposes so don’t compare max. pressure etc. to your perfectly tuned setup ;)
Now the app needs to be adapted. I am also thinking of adding two timers, one for PI and one for extraction.

@Reiss: If you like you can share the communication interface. Maybe it’s just a small change for my app to make it work with your hardware.

Less More
1 year 7 months ago #15149 by Nico Vierl
Replied by Nico Vierl on topic LR preinfusion and boiler settings App
The first update is available now!
As mentioned before a noticeably higher extraction can be yielded by protracting the pre-infusion WITHOUT keeping the high pre-infusion pressure which would turn into a slow extraction instead. This option - to have the pump turn on only once per pre-infusion - is now available through my app and hardware mod. Additionally I played around with what little information is available about the pump pressure and managed to add following features:

While these new features probably won’t work 100 % of the time, they should be pretty reliable with a normally dialed in setup (e.g. no water rushing through the puck during pre-infusion). The option to turn the pump on only once per pre-infusion is working really well for me so far.
Of course you are still free to choose the normal operation of the LR with the pump trying to keep the pre-infusion pressure at the set level. This now also works more precisely with a precision of about two decimal points.
I think I didn't mention it before but you can of course only build the pre-infusion part of the kit without touching the boiler pressure stat. The mod then only requires to connect 4 wires to the machine.

The overall price of the kit including pre-build PCB and programmed components, one pressure transducer, one SSR, power supply and cables would be around 200 € depending on shipping and customs (except EU in which I live). If you already built my mod and want to update please get the update from the app store as well as for the Arduino to upload (using a PC/Mac). Espresso Settings App on Google Play

Less More
1 year 7 months ago #15159 by Joshua McWilliam
Replied by Joshua McWilliam on topic LR preinfusion and boiler settings App
Congratulations Nico this is really advanced implementation! The soft pre-infusion opens up additional possibilities for increasing extraction on lightly roasted beans and really takes advantage of the Londinium R's unique capabilities that other espresso machines don't have. Nice implementation with the shot timer as well, that is a nice feature.