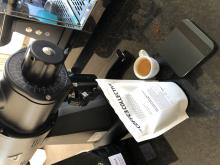 happy to meet the market on price

all original packaging and documentation present

this grinder has had less than 500g of coffee through it

Up to date with all orders now

its 01:20 here, but we have now booked out all the open orders, including those containing the group seal that we stocked out of

DHL will have them to you on monday

have a good weekend 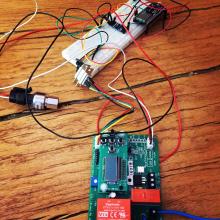 What's that; playing on the wireless?

Four observations regarding the Kafatek Max

as you may know i am fortunate to have a Kafatek Max, and to assist in benchmarking its performance i purchased a brand new EK43S

when i get inspired i might write a detailed review with some images, but i thought it was worth scribbling these observations down tonight

1.  the Max surpases the EK43/S in every area with one exception: sweetness.  Having owned 3 EK43 some years back i was expecting this but i was slightly surpirsed by how lacking in sweetness the Max was, to the extent that i contacted Denis.  I had always run the grinder at its maximum rpm of 400, not really believing that running slower than that would have a significant difference in the cup.  denis suggested that i try running it at 300rpm in the expectation that it reduce the amount of fines produced to the extent that the cup would be significantly sweeter.  i did as he suggested and his advice was exactly right: it significantly sweetened the taste in the cup by reducing the running speed of the grinder from 400rpm to 300rpm.  i was surprised at how pronounced this improvement was.  the EK43S remains significantly sweeter, but running at 300 rpm significantly reduced the gap.  the price of the extreme sweetness offered by the EK43 is a massive loss in body, which will upset some drinkers more than others

2.  the Max has a digital display for setting the target rpm, but it also displays the actual rpm.  as a result of observing this display when running the grinder i have seen that loading the grinder with beans and then turning the grinder on results in a significant passage of time before the grinder reaches its target speed, in my case 300rpm.  so if you accept that the spin speed of a grinder has a significant impact on the taste in the cup, and in (1) above i have expereinced first hand that it does, then you can improve the quality of the taste in the cup by turning your grinder on and way for it to reach full operating speed before loading the beans into the grinder; this will ensure that your beans are all ground at the same speed for all intents and purposes as the moment in which the beans are tipped onto the spinning burrs only reduces the spin speed of the motor by a few rpm; too few to be trouble with

3.  the Max can grind many orders of magnitude finer than the EK43/S

4.  the most remarkable thing for me about the Max is how quiet it is; it is basically as quiet as a hand grinder - it makes a noise similar to a rumbly wheel bearing on a trailer, it really is that quiet and is an absolute winner if you live in a household where not everyone gets up at the same time each morning; with the Max it is very easy to make yourself a coffee in the early morning without waking the rest of the house

i have taken the EK43S to an engineering wizard i know and he has brought all the tolerances to within 5 microns but i am not entirely happy with where it is at.  I have raised this and he has replied immediately saying he has had some more ideas as to how we can further improve the output so i look forward to taking it back in the next few weeks when he is less busy and trying to wring the absolute best out of the EK43

if you are pondering an EK43S note that the 'S' stands for short, not small or silent.  its 1400rpm spin speed on 98mm burrs means the noise it makes is very brief, but for that brief moment it is not too far off running a band saw in your kitchen which may not win you favour in the early morning.  personally i think the EK43S is a pretty lazy effort by Mahlkonig, who i consider to be the Mercedes Benz of coffee grinders.  the 'S' variant could easily be powered by a motor that was much smaller in size but with the same power output, and indeed mahlkonig have such motors utilised by other models in their product line up already, so why not?  a smaller motor would allow the entire form factor of the grinder to be significantly improved, with a less agricultural appearance, which is what is expected at this price point.  the tall hopper supplied also looks poorly matched and drawn as a parts bin special rather than a ground up design to create a domestic version of the EK43

Stock out on group seal only [updated]

In all cases this is due to your order containing one or more group seals, an item that we have carelessly stocked out of and do not expect fresh stock until 25 June.

Good afternoon!
I have just placed an order for parts for my Londinium R. I love this machine. We have it in our coffee shop in Jos, Nigeria and it has been incredible! We are the only coffee shop in town with real coffee and for the expat community here it has been a godsend!!!!
Thank you,
Jocelyn

Another customer writes from the USA...

Just a note to let you know that I am very happy and impressed with the R. I was expecting to keep my LaMarzocco GS3 for daily/early morning use and use the R on weekends or whenever I had more time but that hasn’t been the case. I haven’t used the GS3 since I started using your machine. It’s a lot quicker and easier than I expected and the shot quality is excellent.

One issue to make you aware of, the glue that holds the chrome cover to the plastic top of the water fill isn’t holding up. Not sure if it’s due to heat & moisture because the glue is still tacky and the chrome will adhere if you push the parts together but it keeps separating after it’s been sitting in place. No big deal but something I thought you should know.

Spring 2019 in Nagasaki, from one of our customers in Japan: